The August NBC/WSJ Poll today shows that 64 percent of Americans support free trade, including a majority of Republicans and Democrats. NBC News reports that free trade enjoys the highest support it’s seen since they’ve asked it.

This effect has been observed before. Gallup has shown that belief that free trade is an opportunity for economic growth has also reached an all-time high: 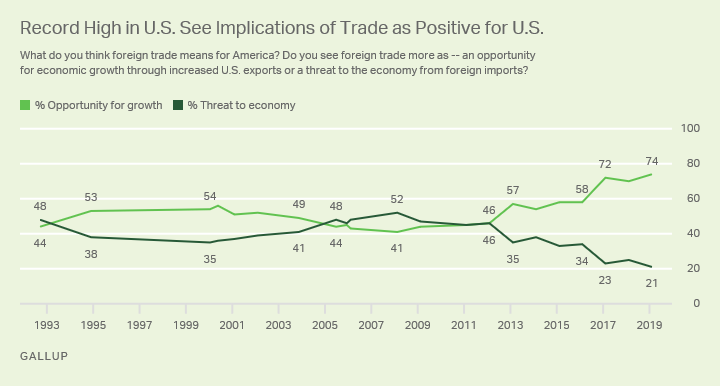 Gallup also reports that only 16 percent of Americans believe that raising taxes on imported goods — also known as tariffs — has helped the U.S. economy.

President Trump’s latest round of tax increases on products imported from China will impact 69 percent of consumer goods the U.S. imports, up from the previous rounds of tax increases that only impacted 29 percent. This is not including the goods issued a three-month reprieve which will now go into effect in December instead of September, which the Administration announced to limit the impact that the higher costs to American businesses and the higher taxes American consumers pay on the Christmas season.

Congress could pass laws to take back tariff power tomorrow, if they wanted to. Polling suggests that would be a popular move. 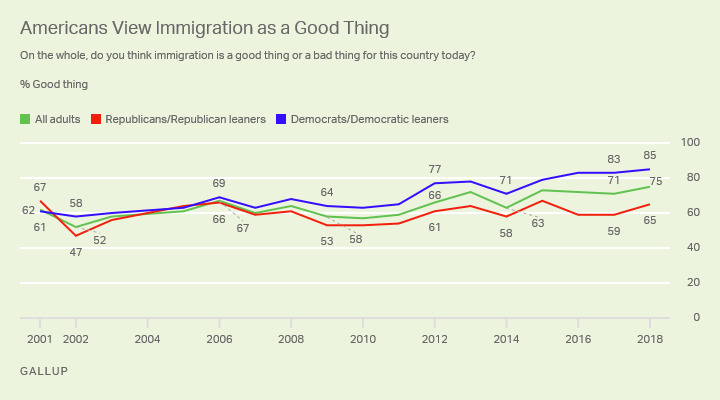 When it comes to immigration rates, 67 percent of Americans would like to see immigration levels increased or stay the same. Only 31 percent want to cut legal immigration. 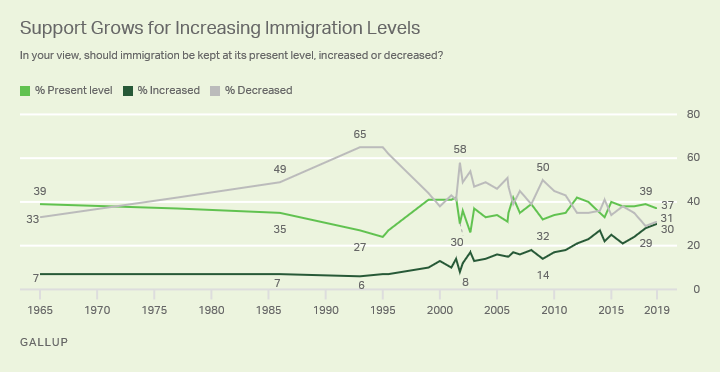 Similarly, a November 18 Quinnipiac poll shows that, by a 47 percent to 37 percent margin, more Americans want to make it easier to legally immigrate to the U.S. Most Republicans are opposed.

Earlier this week, the Administration announced new rules to determine whether potential immigrants will be a “public charge;” analysts expect this will lead to fewer legal immigrants, a top goal of White House adviser Stephen Miller that he couldn’t find support for in Congress.

A majority of Americans also support allowing in migrants fleeing economic malaise and violence in Central America, 57 percent to 39 percent, according to Gallup.

Quinnipiac’s latest poll also shows that 70 percent of Americans believe immigration is good for the country. While more Republicans agree than disagree, support for legal immigration only earns 49 percent of support among Republicans.

Quinnipiac also asked an interesting question I hadn’t seen before:

Which comes closer to your point of view: A) it is better to keep all undocumented immigrants in detention centers, even if it causes overcrowding and bad conditions, or B) it is better to allow some undocumented immigrants to be released under supervision if there is not sufficient room, even if it means some of them will not return for their court dates?

A majority — 53 percent — of Americans say it’s okay to release undocumented immigrants, even if they don’t return for their court dates. Government data shows that over 80 percent of migrants attend all of their court hearings. This increases to 99 percent if they have access to an immigration lawyer.

Meanwhile, polling shows that the overwhelming majority of Americans support a pathway to legal status or citizenship for undocumented immigrants currently living here, with support varying only based on how the question is asked. This includes:

Similarly, around 80 percent of Americans support legal protections for Dreamers.