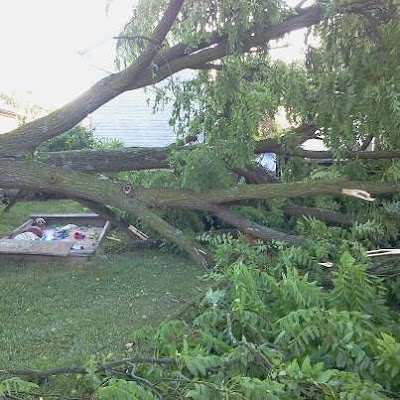 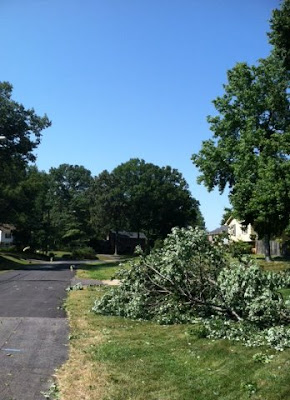 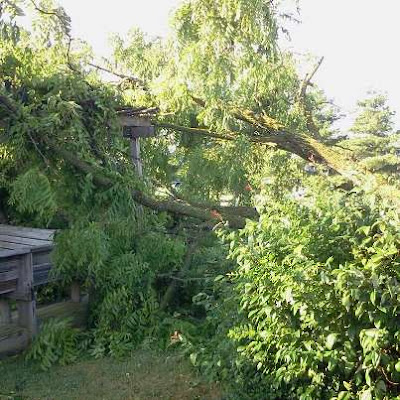 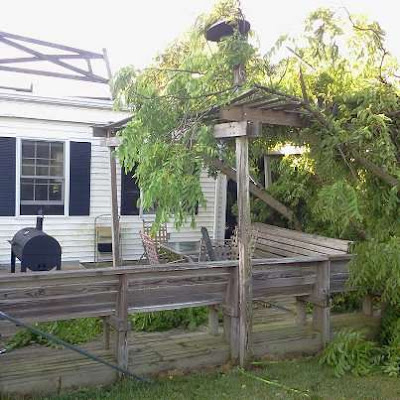 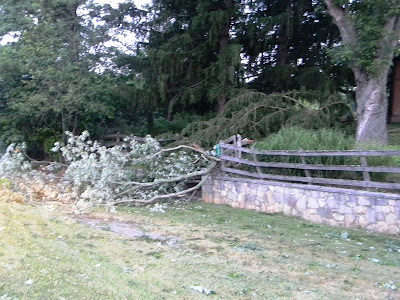 Some of the storm damage in western Augusta County and Staunton … 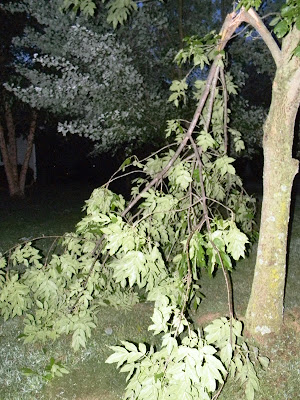 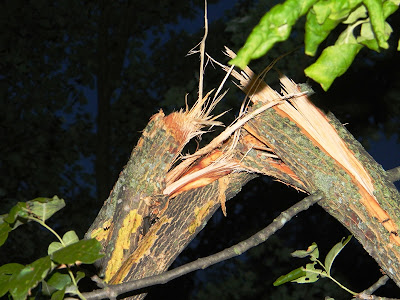 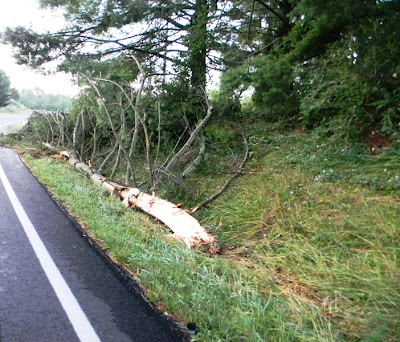 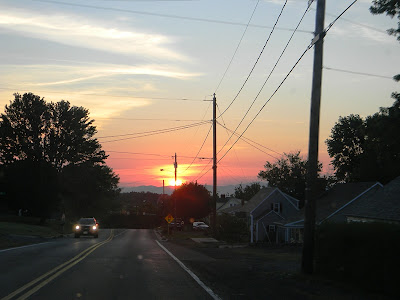 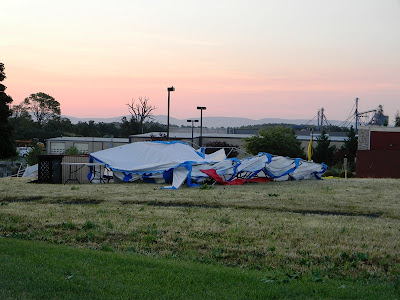 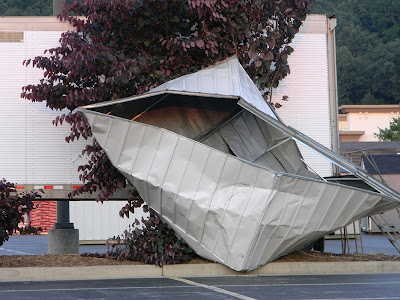 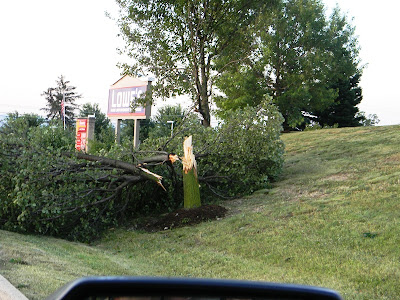 The electricity at our house in western Augusta County went out shortly before 9:00 Friday night, and the sound of the wind wasn’t far behind. Storms approaching the eastern part of the country after extremely high temperatures during the day had caused weather forecasters to put out extreme weather alerts.

The electricity Saturday morning remained out for three-quarters of a million Virginians including those in Staunton and parts of Augusta County. All retail businesses in Staunton were closed as folks searched for ice and coffee in the early morning hours.

We had limbs down in our yard but no major damage other than no electricity. Shenandoah Valley Electric Co-op said not to expect the power to be turned back on before Sunday and, with the forecast calling for another hot, muggy, day with temps near 100, many will be left uncomfortable.

Friday’s high at my house was 102.9 and the overnight low was 56 degrees. Harrisonburg set a record high temperature of 104 on Friday.

As the sun rose this morning and in search for coffee and ice, we landed at the Fishersville McDonald’s at the intersection of I-81 and Rt. 608 in eastern Augusta County. The place is booming this morning with others looking for breakfast. A group of Boy Scouts, loaded with rain-soaked gear, stopped to get something to eat before heading home. Other campers who had been in the area, packed and heading for home, stopped for a coffee fix.

In Northern Virginia, two people were reportedly killed last night at the height of the storm. No word yet as to how this affected the wildfire in Shenandoah National Park.

We’ll be waiting for our power to come back on but, until then, we’ll ice down the fridge items and do what we can do be comfortable. Stay cool out there!

UPDATE 1: Governor Bob McDonnell declared a State of Emergency due to the excessively high temperatures that are forecast just as thousands of Virginians have lost electricity after last night’s damaging storms.

UPDATE 2: Augusta County Supervisor David Karaffa reported that due to power outages in half the county, Kate Collins Elementary School is being set up as a shelter with air conditioning and cold water so people don’t suffer heat stroke in their homes. Some Volunteer Fire Departments are also setting up shelters.

UPDATE 3: Staunton City Councilwoman Andrea Oakes passed along that Gypsy Hill Park is closed due to extensive damage, and also noted that Kate Collins Elementary School was open for those still without electricity in the SWAC area.

UPDATE 4: From Republican U.S. Senate candidate George Allen‘s Facebook page: “Our thoughts are with the many families whose homes and businesses are still without electricity after last nights devastating storms. And, we appreciate all the people working hard in this hot, humid weather trying to restore power as soon as possible. If you can, it would very helpful to check on your elderly neighbors.”

UPDATE 7: From over the mountain in Albemarle County, confirmation from police of two storm-related fatalities due to falling trees.

UPDATE 8: A list of cooling shelters has been provided by NBC-29.

UPDATE 9: Staunton Councilwoman Andrea Oakes just called to get the word out that Bessie Weller Elementary School in Staunton is opening as a cooling shelter for those without electricity.

UPDATE 11: Our electricity came back on around 1:30 Saturday afternoon. Many in Staunton, Fishersville, and other areas of Augusta County are still without and no word on how long it will be.

Multiple traffic lights are still out in Staunton and Waynesboro, and motorists were making their own way. We only saw one intersection in Staunton where traffic was directed by police. Many businesses are still without power. The food places and service stations that are open are swamped. Cars are lined up waiting for gas pumps and to get into parking lots of restaurants. Add to the local mix the tourist traffic traveling the interstates — I-81 and I-64 — and it is quite a backup.

Martin’s Super Market in Staunton reopened and their internet cafe area was full of people charging cell phones, laptops, and using the internet service. Everyone was swapping stories about their storm adventures and which places they had found to be open or closed.

Political signs in the area took a beating so those will have to be replaced or repaired. Some have flown away with no clue of where they are.

I heard that Augusta Board of Supervisors Chairman Tracy Pyles had a tree fall across his front porch so hope there’s not major damage for them. Update: Huge oak trees fell at Supervisor Pyles’ house. One crushed the front porch and another crushed his jeep. Video here and here. Thankful prayers that no one was hurt….

The bad news about Staunton’s Gypsy Hill Park having so much damage is the 4th of July festivities planned there this upcoming week including the parade on Wednesday.

In Waynesboro, Target, Kohl’s, McDonald’s, Chick-fil-a, McAlister’s, and all the other sores in that shopping area were open for business.

We had multiple limbs broken out in trees around our house but, thankfully, nothing major and no damage to house or vehicles.  We’re thankful for the family and friends who offered their homes for our use.

UPDATE 13: All of Skyline Drive has been reopened.

UPDATE 14: Dominion Power Director of Media Relations David Botkins has a video update about the progress of restoring power as of 8:30 p.m. Saturday.

UPDATE 15: The weather phenomenon that caused Friday night’s storm damage is known as a derecho. AccuWeather has details of this little-known but powerful wind storm.

UPDATE 16: Dominion Virginia Power said Sunday afternoon it may be a week before power is restored to all customers.