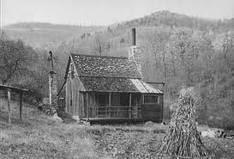 There’s a narrow gold wedding band I wear on my left hand along with my own. It is my grandmother’s wedding ring that was left to me when she passed away many years ago.

John Francis Osborne was from Grayson County in southwestern Virginia. Mollie Beatrice Kennedy lived just across the state line, on the other side of the New River, in Allegheny County, N.C.

The two young lovers met at an all-night dance, a tradition during those days in the mountains where young people would meet at someone’s house for a dance party. The social gatherings would last all night because folks lived such long distances from one another, and it was difficult and dangerous to travel through the mountains after dark.

I don’t know how long they courted but my grandmother, whose father was a prominent store keeper and farmer in the Turkey Knob community outside Sparta, NC, consented at some point to become my grandfather’s wife, and moved away from her family. Because John was such a stern man in his older years, I have tried to imagine him as a star-crossed teenager smitten with Mollie.

The marriage license was obtained in Virginia so my grandparents, along with the wedding party, walked to the Virginia-North Carolina state line and were married in the middle of the road, according to one of my late aunts, probably where it crossed the New River. There is no one left to tell us all about that special day.

Did Mollie pick wildflowers along the way to hold during the brief ceremony? Was it a hot, humid mountain day? Or did the clouds roll in and they found themselves dodging thunderstorms? My mother said those types of weddings were common at that time, and certainly a lot cheaper than the opulent occasions that are so popular these days.

As two teenagers beginning life together like generations had before them in those isolated, hard-scrapple mountains, John and Mollie didn’t have money for a fancy wedding. It would be needed for the tough days ahead as they settled into a small cabin on the side of a mountain near an area known as Mouth of Wilson, located in the shadow of Grayson Highlands and Mt. Rogers in the days before those scenic areas became part of the state and national park systems.

Their property was sloped and rocky … the elevation was over 3,500 feet … and to walk it today makes me wonder how they were able to survive in the harsh winters and difficult summers. With only two uninsulated rooms to live in, they began raising their family that would eventually include 10 children. My mother, who passed away two years ago at the age of 90, was the youngest and last surviving of her immediate family.

My grandfather farmed with a mule and plow, piling rocks on the hillside under the trees, and to this day the rocks are still in the same place he piled them over a hundred years ago. For me, to touch those stones is almost to touch him.  It was extremely hard manual labor for the tall, lanky man who had a growing family to feed. Below the remnants of the cabin, a small creek still tumbles down the mountain, a source of water during the days they lived in those cramped, sparse conditions.

They were surrounded by family. Our relatives are all through those hills, most staying close as they grew into adulthood, married, and raised families of their own. My grandfather’s parents lived in a log cabin on the Knob, the family place near a mountain top. The hand-hewn logs included two rooms and a fireplace on the ground floor, and one large room upstairs, just a short distance from John and Mollie’s cabin.

Because my grandparents were tough and made their own way, they set a work ethic that continues to this day for those of us who followed. And, as I once again look at the gold band on my ring finger, I think about how it all began 118 years ago when John and Mollie became man and wife.

*My grandmother lost her wedding ring when I was a baby so my mother replaced it and had the initials and date engraved since that would not have been on the original. My grandmother left the ring to me, the oldest of her youngest child’s children.

Cover photo: My grandmother’s thin wedding band and my own