The process of redistricting for voting precincts has begun in Augusta County where government leaders are looking for feedback from residents.

Here is the release from the county….

The Augusta County planning department is beginning the process of redistricting voting precincts and invites county residents to offer commentary on precinct boundaries through an online survey [1].

The interactive map available for review online reflects the new magisterial district boundaries [2] that were recently redrawn as part of the redistricting process. The map also calls attention to foreseeable changes to specific voting precincts, which need to be aligned with the redrawn congressional district state map [3]s recently approved by the Supreme Court of Virginia.

In order for voting precincts to be contained within a single congressional district as required by  Virginia code [4], the boundaries of some voting precincts will need to be adjusted. Draft proposals of the changes to voting precincts and polling places will be announced in late January.

Anticipated changes to the county’s precincts and polling places include but are not limited to the following areas. 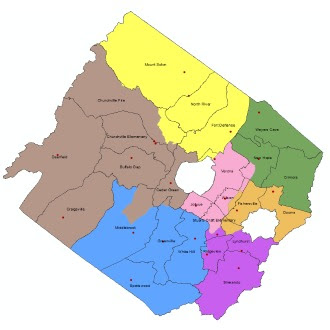 Voting precinct requirements are based on the number of registered voters. Precincts must:

Additionally, polling places must be Americans with Disabilities Act (ADA) compliant and be located within the precinct or within one mile outside the boundaries. Use of public buildings is preferable.

Because the Electoral Board is responsible for establishing new polling locations for the county, the redistricting committee, whose purpose is to redraw magisterial district boundaries and voting precincts, has expanded to include the Electoral Board, Voter Registrar, Constance Evans, and registrar office staff, along with Board of Supervisors representatives, Scott Seaton (Wayne district) and Pam Carter (Pastures district), and county staff and administration. David R. Leatherwood, Georgia Alvis-Long, and Marcy Reedy represent the current Electoral Board.

A public hearing for commentary on proposed voting precincts and polling places is tentatively set for February 9, 2022, with consideration for approval by the Board of Supervisors at their regular meeting on February 23.

Please make any precincts and polling locations comments online [5]. Questions can be directed to [email protected] [6] and 540-245-5700.

Every ten years, Augusta County must review and analyze new census data to ensure magisterial districts are balanced in population. As part of the process, voting precinct boundaries must be established to reflect the redrawn districts and state congressional district maps.