No, Amanda, We Don’t Want a Victim as our Next Governor

I am patiently waiting for that special woman to come along that will make history as the first female Governor of Virginia. She’ll be intelligent, compassionate, strong, and a little gypsy in working her way through the political climate. All these qualities are as necessary to the office as light is to day.

Amanda Chase does not possess any of them. Not one.

Am I being unfair? Well, let’s examine the actions of this clown show campaign and find out.

I should preface this column with full disclosure. I have always been grateful for being a woman. We have it easier in many respects, I can admit that. But when you see another woman running around in a pathetic attempt to make herself a victim, it makes you sick. It’s a slap at every non-leg-throwing woman who works hard and doesn’t expect special treatment. You know, those of us who expect to be regarded for our abilities? Anyhoo…

On her website, the (wishes she was) fair Ms. Chase says, “Virginia needs strong, relentless, ‘tried by fire’ leadership … I am that leader.”

Chase is relentless, but the rest is bullshit. Full stop.

The only thing “tried by fire” is the ends of her hair.

Strong leaders manage to gain respect from their colleagues, you know … so they can accomplish something, but not Amanda.

Strong leaders don’t whine about men of God on Palm Sunday because they didn’t get the attention they wanted; that’s the epitome of arrogance. 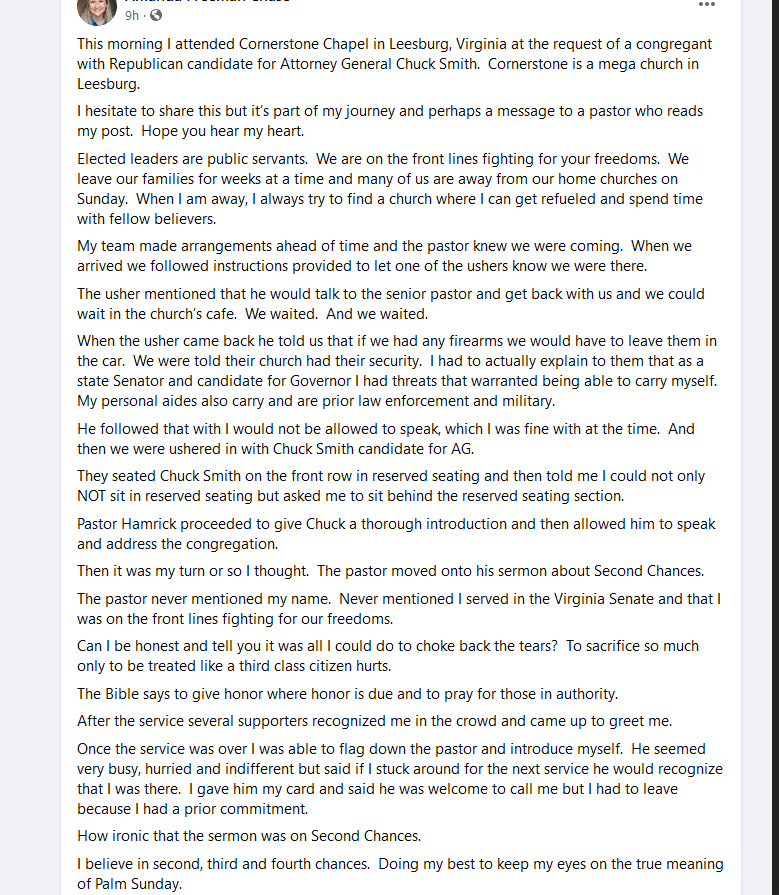 Strong leaders (or decent Christians even) don’t forget to hit “end call” before calling someone a bitch; that’s the epitome of stupid.

But no one, not one person who would deserve to be Governor of Virginia, takes off after a man’s livelihood over nothing, just trying to hit the opposition. Worse even, she’s doing it to make you feel sorry for her, and maybe set herself up for a lawsuit when she loses the May 8 Convention.

I have uncovered startling evidence of corruption among a key Republican Party of Virginia staffer as it relates to the upcoming statewide convention!

RPV Staff are doing undisclosed paid work for Pete Snyder’s campaign in violation of RPV’s own conflict of interest provision!

Jordan Labiosa is paid by the Republican Party of Virginia to post “calls” to its website. The calls contain instructions for how voters in a locality can register as delegates. Knowledge of the calls is essential to any campaign running in this year’s convention. The below image marked “Instruction Email” is from an email sent by RPV legal counsel, Chris Marston, lays out Jordan’s role in the process.

None of this would be an issue if Jordan Labiosa weren’t also being paid to do work for Pete Snyder gubernatorial campaign! Every time a local party chair has sent in their information to Jordan they have, without their knowledge, been directly forwarding Pete Snyder’s campaign the call information BEFORE any of his rivals.

How do I know Jordan is doing paid work for Pete? RPV Western Vice Chair, and Pete Snyder employee, Dan Webb committed a “Washington gaffe.” He accidently told me the truth! When I asked about appearing at the Roanoke County Republican Committee which Dan chairs, he explained he had “recused himself due to a conflict of interest UNLIKE Jordan Labiosa!”

In an attempt to hide the terrible conflict of interest Jordan is being paid through another vendor so his name will not directly show up on Pete Snyder’s finance report. Luckily for me an intrepid volunteer was able to uncover Jordan’s role by obtaining Jordan’s work email at Pete Snyder’s campaign!

First, the volunteer purposely sent an email with an improper name to Pete Snyder’s server. It bounced back as an undeliverable as would be expected and shown in the image below marked “Undeliverable.” Next, my grassroots champion sent a message to Jordan’s Pete Snyder email: jlab…@petesnyder.com, and it did not bounce as shown in the image below marked “Sent.” By the time you read this Pete’s campaign will likely have shut down Jordan’s email account but the proof will last forever!

Jordan’s secret work for Pete, and Dan’s abdication of duty as a RPV officer to report the conflict, have tainted this election. I will continue to seek the Republican nomination, not because the process is fair; the Establishment is doing everything in their power to rig it against me, but because I WILL NOT LET THE CHEATERS WIN!

As a man of honor, I am sure RPV Chair Rich Anderson had no knowledge of the gross fraud happening on his watch. However, he needs to act swiftly to repair the damage wrought by his rogue staff and corrupt officer.

I call for RPV to immediately terminate Jordan Labiosa given his secret work for Pete Snyder’s campaign!

Furthermore, I call on Dan Webb to step down as RPV Western Vice Chair for not disclosing this conflict to RPV. If he does not step down the State Central Committee should remove him immediately!

Finally, I ask Chairman Anderson to review and disclose any conflicts related to the statewide campaigns and RPV staff and vendors as soon as possible.

The Party needs to clean up this process IMMEDIATELY or NO ONE will have, or should have, confidence in its results.

Now, in case you’re wondering why this would bother anyone with a sense of decency, let me explain.

First of all, someone PLEASE get this woman a dictionary so she can look up the word fraud. Secondly, Chairman Anderson already has a conflict list … it’s on the website.

And finally, and most importantly, Mr. Labiosa posts the unit committees’ calls to the website for the RPV? SO WHAT? This doesn’t give Snyder any advantage that matters, and Chase knows it. And she fails to mention that she was harassing the committees for the delegate lists before they were even finished. Convenient, no?

But if she can use this to make herself look like the, “Poor me … these mean men just won’t give me a chance to fight for you,” line of crap … works for her. You see, she is counting on those of you who might pity her before you have the chance to look at her actions and understand that she has never done anything for you to begin with. And she never will.

No, Virginia needs a Governor with a clue. Not a damsel in Orange-Red distress.

Email a friend: No, Amanda, We Don’t Want a Victim as our Next Governor