Will the Parole Board Become the GOP’s Get-Out-of-Jail-Free Card?

“Real happiness, in politics, is a wide-open hammer shot on some poor bastard who knows he’s been trapped, but cannot flee.” – Hunter S. Thompson

The Republican Party of Virginia has managed to ignore what could possibly be their best issue of campaign 2021 long enough and thoroughly enough to let Democrats flip it to their own advantage. Whatever that says about the RPV, it says loud and clear.

I’m referring to the recent revelations regarding the Virginia Parole Board. In a normal election year, I could just stop here and link to a slew of Republican statewide candidates, but this is the RPV after all, so Norm Leahy was left to do the job. This is no knock on Norm. It’s the press’ job to hold government accountable, and when the opposition is as utterly dysfunctional as the RPV, the media’s role becomes doubly important.

The Democrats – reflecting the acumen that has rewarded them with all statewide offices and a legislative majority – have already begun spinning this in their favor. As Norm reported, Clark Mercer, Governor Northam’s chief of staff, has decided the best defense is a good offense:

Far be it from me to disagree with Norm, but I think even he would acknowledge this isn’t “normal” – especially given that the investigator who started this whole brouhaha was fired this week (Virginia Mercury). Clearly the Northam Administration is fully committed to this “bias and lack of objectivity” narrative.

At first glance, this looks like at the best accidental ad for Babylon 5: In the Beginning of all time (“Arrogance and stupidity, all in the same package – how efficient of you!” – Londo Mollari). Upon closer inspection, however, the Northam strategy might actually work. The reason was Mercer’s deliberate focus on the case of Vincent Martin – accused, tried, convicted, and sentenced for killing a police officer in 1979.

Now, I was in grade school in 1979 – and in a New Jersey grade school at that – but there is one thing about Martin’s case that is somewhat unique: Vincent Martin has insisted for forty-plus years that he’s innocent. Graham Moomaw of the Mercury confirmed the image below was part of an email from the former Parole Board chair Adrianne Bennet on the matter. 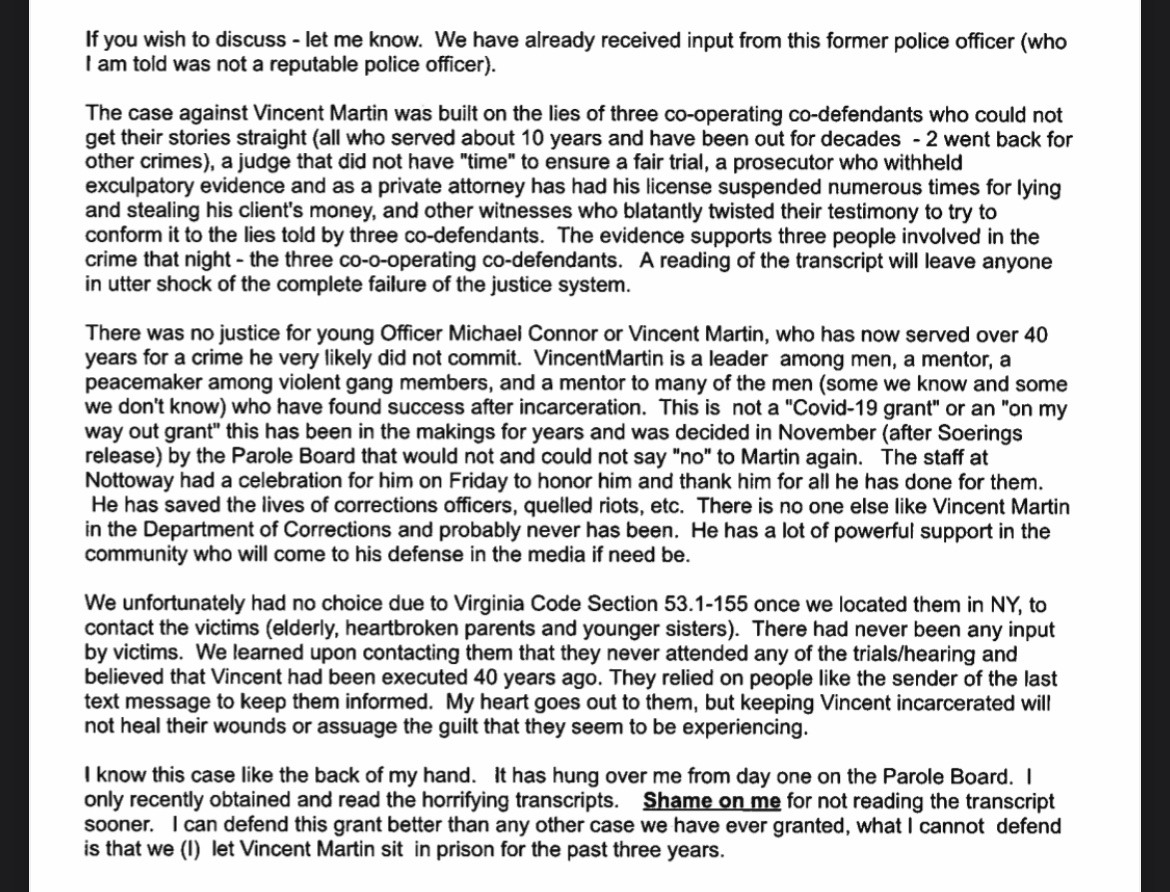 You don’t have to agree with everything Bennet wrote to understand why Northam et al would be happy to keep the focus on this case. Any Republican running for office who thinks they can accuse the Democrats of leniency for cop-killers will run smack into the question: “Why are Republicans so eager to send an innocent Black man back to prison?”

Coming to a television near you, whether you like it or not.

As it happens, Vincent Martin isn’t the only parolee whose case is at issue; there are several others (the Mercury again). How this plays out in November will depend largely on whether the Republicans can avoid shiny-object-symbolism and do the work of shaping the narrative on the larger issue.

I’m not holding my breath.

Email a friend: Will the Parole Board Become the GOP’s Get-Out-of-Jail-Free Card?