Delegate Glenn Davis is making shrewd and smart political decisions late in the campaign season. Doing the unthinkable, Delegate Davis (R-84th HOD) has reported an in-kind contribution from the Democratic Party of Virginia.

He didn’t actually take money or support from DPVA. However, Davis is using a caveat in the Code of Virginia to report mail pieces that his opponent and the Democratic Party of Virginia are sending opposing his re-election. 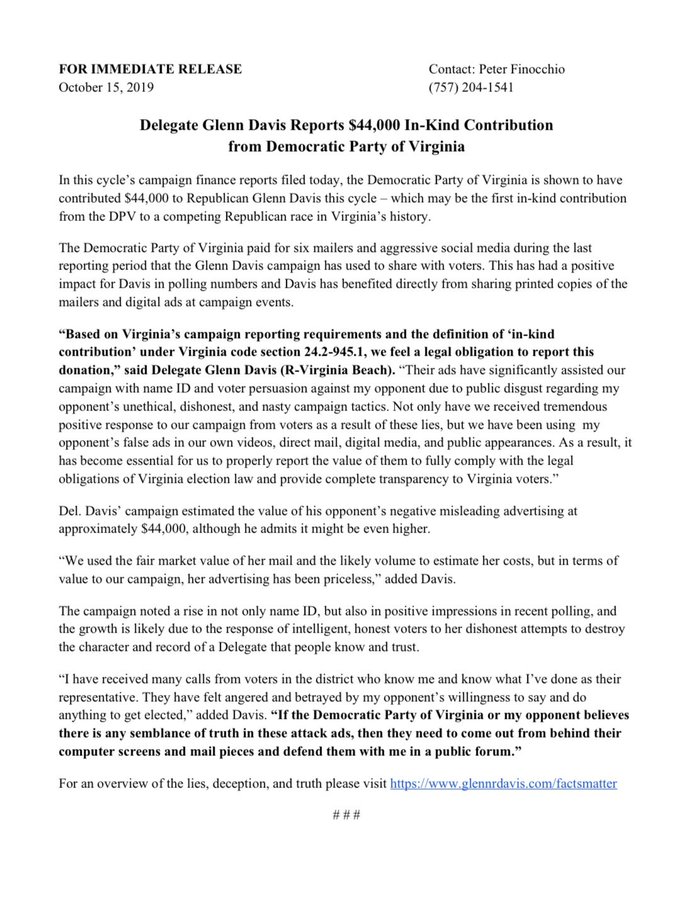 Davis reported in multiple mail pieces that the Democratic Party of Virginia had assisted his campaign for re-election. In a statement to Bearing Drift, Delegate Davis had this to say:

“My opponent has spread blatantly false attacks about my record. I choose to use this to benefit my campaign in pointing out the lies that my opponent is spreading. The thing is, Karen Mallard and the Democrats are not scared of the far right wing Republicans, they are scared of the sensible Republicans who can get things done for their districts.” [emphasis added]

Now some of you might be thinking, “This is crazy!” Sure, it’s crazy, but as we say in Southwest Virginia, crazy as a fox!

When I say crazy as a fox, I don’t even mean that it’s crazy. This move is cunning (just like foxes), calculated, and an absolutely brilliant political move by the Davis campaign.

Taking negative attack ads used against you, then turning them into a net-positive by pointing out the blatant falsehoods, is a genius political strategy. As far as I know, it’s never been done. However, in these trying political times, I hope Davis’ colleagues in the House will look to their colleague from Virginia Beach for a strategic move to win their election.

Some of the lies being spread by the Mallard campaign are so false that it is pathetic. One mail piece says that Davis “denied access to affordable healthcare to 400,000 Virginians.” Nothing could be further from the truth because Delegate Davis has been, on record, supporting Medicaid expansion since at least 2014.

Karen Mallard has even gone so far as to sending text messages to supporters saying Glenn Davis did not support Medicaid expansion until 2018!

To add insult to injury about Ms. Mallard’s text’s and mail pieces, Davis not only voted for Medicaid expansion on multiple occasions but one of his first opinion pieces to the Virginian Pilot was about his support for, you guessed it, Medicaid expansion!

I more than anyone else should know about Glenn’s support for Medicaid expansion. Most of you will remember that when he ran for Lieutenant Governor in 2017, I supported his opponent, Senator Jill Vogel.

However, Delegate Davis was always an extremely worthy opponent and always conducted himself with dignity and kindness, even to me, one of the most vocal Jill Vogel supporters west of Charlottesville. That being said, one of the many attacks that his opponents in the Republican Party threw at him was his consistent support of Medicaid expansion, so much so that Washington special interest group Americans for Tax Reform blasted him for it.

I myself used this as a political attack point to advance my own candidate, which I now regret. Of course, hindsight is 20/20, and when the final budget with Medicaid expansion came to a vote in 2018, Senator Vogel, and myself to a certain extent, supported the measure.

The point is, Davis has NEVER wavered or changed or even thought about reversing on the issue of making healthcare solutions for Virginians. He has supported the effort to extend healthcare coverage in a conservative manner for his entire career in the General Assembly, as documented by news reports and his voting record.

However, if I have learned anything about Davis in his political career, he takes the nonsense of his opponents and makes it a political net-gain for his election efforts. The eternal optimism that he espouses from day to day, the ability to take lemons and make them lemonade, is something I have never seen in the Republican Party of Virginia.

In all my years of campaigning, on his worst day Delegate Davis is excited to get up and fight for citizens of Virginia Beach and the entire Commonwealth of Virginia. I’m proud to call him a friend and he will always be the Gentleman from Virginia Beach.