Virginia political operatives woke up to two headlines that loom large next three months of campaigning. First, in last night’s special election in OH-12, the Republican Troy Balderson eked out a 1% win over the Democrat, in a district Trump won with 53% of the vote. There are 60 seats Republicans are defending that are less Republican than OH-12, including 4 districts in Virginia (2nd, 5th, 7th, and 10th).

As if that wasn’t heartburn-inducing enough, the VCU Wilder School for Public Affairs released a new live-interviewer survey of Virginia that includes both a Senate ballot: 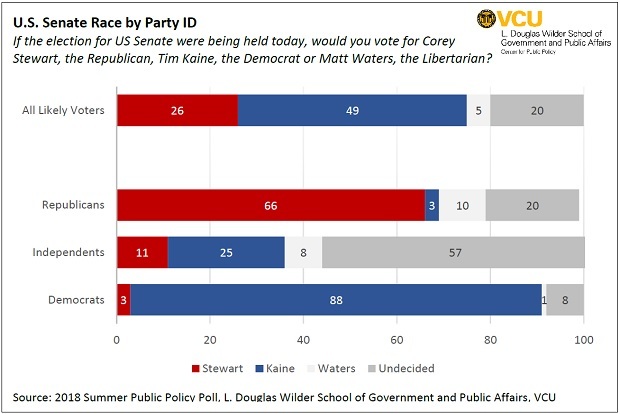 And a Congressional Generic ballot: 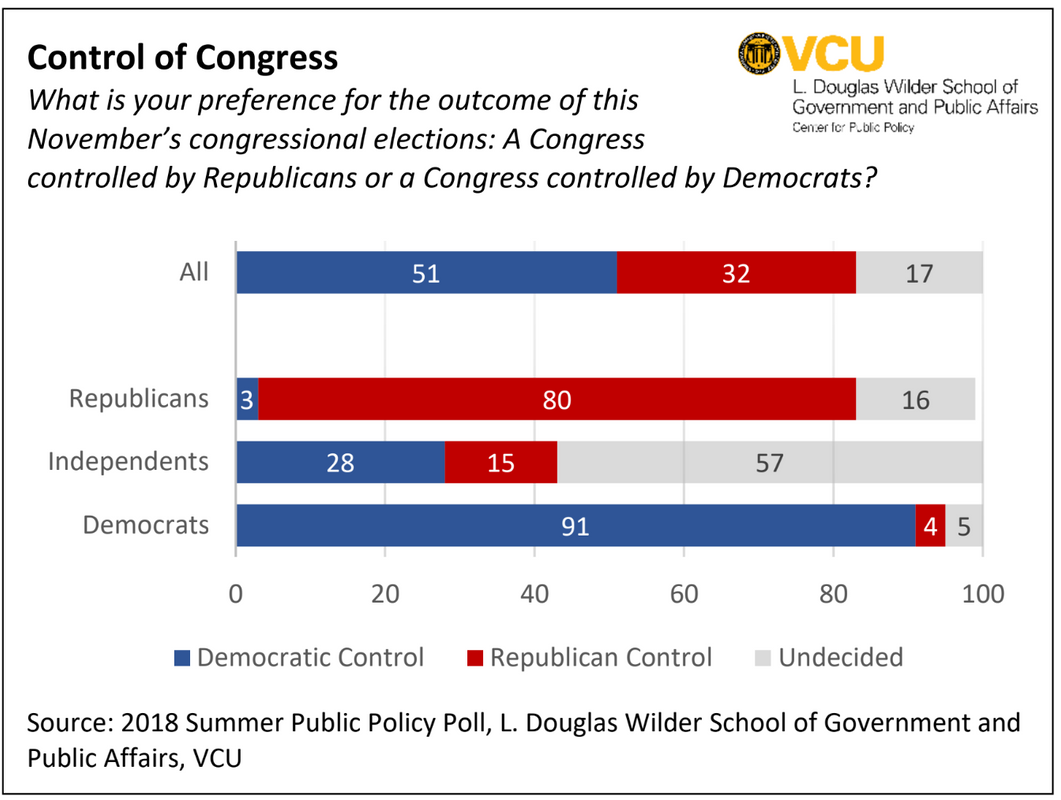 Turnout from last night paints a concerning picture for Virginia Republicans. OH-12 has a portion of the Columbus suburbs in Franklin County; this is the blue part of the district (and the only county that the Democrat won), as Trump won only 34% here in 2016. OH-12 also has the suburban/exurban Delaware County, where Trump won 55% of the vote. Together, these two counties make up 57% of the district. The other 43% are across 5 Republican rural counties, where Trump won anywhere from 62% to 72% of the vote in 2016.

The results from last night largely track with how the district voted in 2016. Trump won 34% in Franklin County; Troy Balderson won 34%. Trump won Delaware County with 55%; Balderson won with 54%. So why was the race so close? Turnout.

In short, turnout was highest where Democrats vote, and lowest where Republicans vote.

We’ve seen this play out before. Here in Virginia in 2017, turnout across the state was around 48%. Turnout in Arlington, Alexandria, Fairfax, and Prince William, where Northam ran up huge margins, was over 52%. Turnout in rural counties like Wise, Tazewell, Mecklenburg, and Russell were 40% or less. This, on the way to a 9-point Northam win and a bloodbath in the House of Delegates, with much of the damage coming from suburban districts Republicans have been used to carrying.

How does this increased-suburban, decreased-rural turnout split impact Virginia’s 2018 races?

This should put Congressmen Taylor, Brat, and Comstock on notice. Denver Riggleman and Rob Wittman are in better positions, but Riggleman is playing catch-up on name ID and fundraising in the open VA-05, and after last night can’t take anything for granted.

The headline from the poll is Corey Stewart trailing Tim Kaine by 23-points, with only 26% of Virginia voters saying they’re likely to support the Republican nominee this fall. Obviously, with 20% undecided, these numbers aren’t going to hold up through November, as Stewart’s absolute floor is the 33.7% Jim Gilmore won in 2008, and probably closer to 38%-40%. But the numbers aren’t good, and raise new questions about the impact they’ll have on downballot Congressional races. 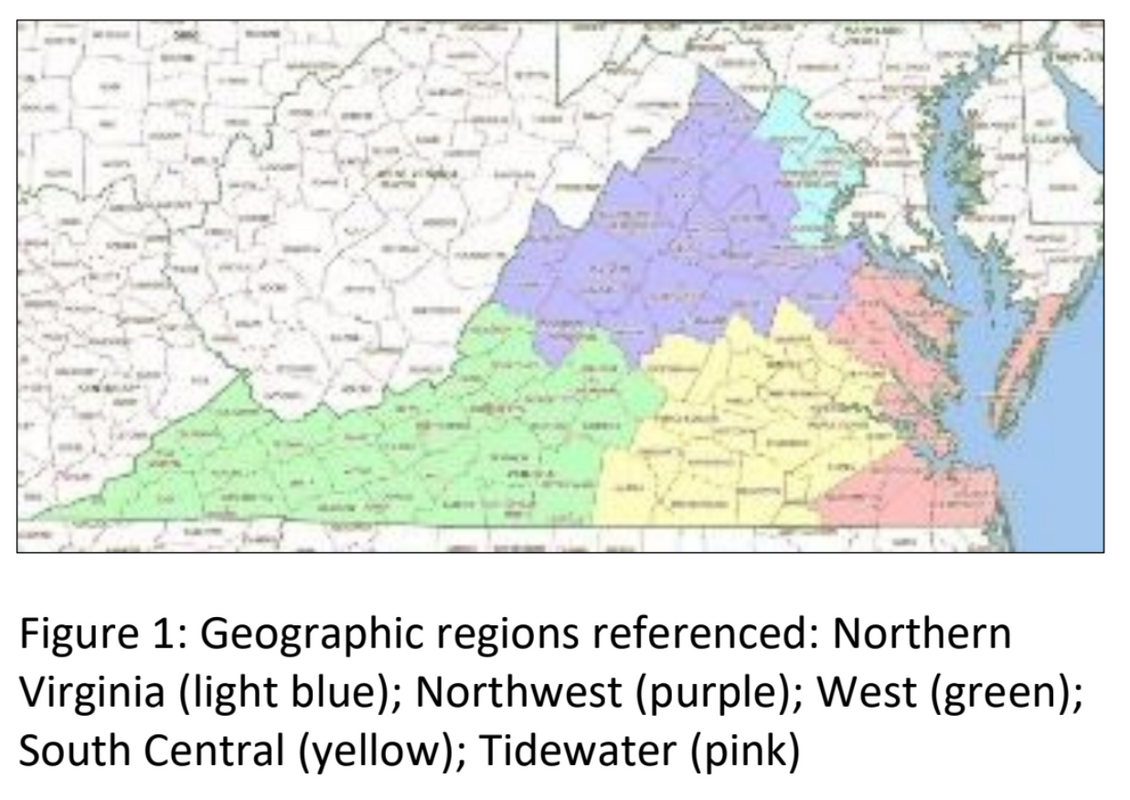 Obviously, this is a bad sign for Barbara Comstock in the 10th (along with the only publicly released poll thus far). It’s also bad for Scott Taylor in the Virginia Beach-based 2nd District. Taylor’s seat has largely been considered “lean Republican” this cycle, but that may be revisited soon. The 7th and 5th both reach across the “Northwest” and “South Central” regions, but Brat’s portion is considerably more suburban than Riggleman’s.

Republicans have gone 8-for-9 in special elections this cycle, despite some close calls. That effort has been led by the Congressional Leadership Fund and its Executive Director Corry Bliss, a veteran of Virginia politics. Bliss released a terse victory statement after last night’s results:

“While we won tonight, this remains a very tough political environment and moving forward, we cannot expect to win tough races when our candidate is being outraised. Any Republican running for Congress getting vastly outraised by an opponent needs to start raising more money.”

Bliss is subtweeting a lot of Republican incumbents across the country here, including a handful in Virginia. In our Q2 fundraising round-up, we noted that Taylor, Riggleman, Brat, and Comstock were all outraised by their Democrat opponent (albeit Comstock by less than 3%). In addition, Riggleman’s late entry left him trailing in cash-on-hand. (Fortunately, Rob Wittman is doing all the things he needs to do to keep up his margin of victory.)

National Republican groups were able to drop $3 million into OH-12 to salvage it, and ended up outspending Democrats 5-1. That financial advantage won’t be present in November in most races, including in Virginia.

This exercise in doom-and-gloom isn’t meant to write off any of these races. Barbara Comstock is the best and hardest-working campaigner in Virginia. Scott Taylor is a much better fit and advocate for the 2nd District than his opponent. Denver Riggleman has quickly established himself in fundraising and campaigning in the 5th. Anyone who counts out Dave Brat should ask Eric Cantor how that went for him. But any Republican who is ignoring these glaring signs is inviting catastrophe.

Last November, conventional wisdom had Republicans losing 5-6 Delegate seats. The most aggressive Democratic projections were 8-10, and some Republican commentators thought it might be as few as 1! In the end, 15 seats flipped, and a half-dozen more were close.

The conventional wisdom is that only one, maybe two districts in Virginia will be competitive this fall. That is folly, and leads to a complacency Virginia Republicans simply cannot afford. One look at the rural turnout in OH-12, and you will reconsider what a “worst-case scenario” might be if things continue down this path.