I have not been able to really call myself a blogger lately, mostly due to professional responsibilities. I still enjoy reading Bearing Drift and keeping up with Virginia and national politics, but haven’t had the hankering for writing since the summer.

There is something going on in Arlington, however, that is so unfair, and so “under the radar” that I felt the need to come out of my self-imposed exile and speak out. You, dear reader, may think this unimportant in the grand scheme of things, but when something is manifestly unfair, and when it impacts an especially distinguished and patriotic group of older folks, I think people need to speak up.

To put it bluntly Arlington County is using an unfair application of tax policy to willfully run United States Military Veterans out of the county. They are doing this by purposely punishing the Army Navy Country Club. Virginia Legislators have intervened to help, and now local politicians are falsely claiming that the legislation helps “rich white people” – a charge as disgusting as it is inaccurate.

Full disclosure – I am not a member of Army Navy. I could be, as I served in the Army. My two sons serve today, and could join as well. Many of my veteran friends (of all races by the way) are members.

Since 1924, Army Navy has been devoted to those who have served the nation through military service. Of the Club’s 7,200 members, almost 75% are active duty, retired, or former military officers. Some positions are open to civilians at the market rate ($72,000), but military do not pay anywhere near that amount. (Only 5% or so of the membership joined as civilians.) An Army Captain, with 12 years of service, for example, pays an initiation fee of only $3,500, and newly commissioned officers join for free.

So, the idea that the Army Navy membership is wealthy or exclusive is absurd (as is the disgusting racial charge). Everyone knows we underpay our military for the work they do. They do that work anyway, out of selfless service to our Nation. It also doesn’t take a geographer to figure out that Army Navy is located near the Pentagon and in an area with the highest concentration of active military – and military veterans – in the country.

But for some reason (gee, let me guess) Arlington County treats Army Navy not as open space (which it is) but as developable land, and charges it a tax ten-times higher than, for example, the Congressional Country Club pays (see the graphic). Based on this unfair and illogical application of tax policy, Army Navy’s assessed value ($157 million) is more than the next nine golf courses (excluding another Arlington course also impacted) in Northern Virginia combined. Just to put that into context, the charge of $12 per square foot equals nearly $500,000 per acre! If you want to run the club out of Arlington, grab the space for high density development and get rid of all those pesky Veterans, well this would be a good way to do it. 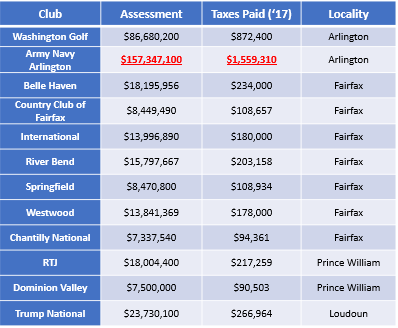 Thankfully the Virginia General Assembly, with leadership from Delegate Tim Hugo, has stepped in and offered House Bill 1204 which requires Arlington County to assess properties above 20 acres based on their use (duh!), which would bring their tax liability in line with other country clubs in the area, and be a fair and logical application of tax policy.

The County has, of course, objected to this intervention claiming first that the issue is in litigation (it’s not), second that they are working on addressing it at the board level (they are not), and third, most revealingly, that the property is just worth more. On that last point they forget to note that since 1960 the Arlington County Board has declared that Army Navy’s property should forever more be used as open space, but the County Board opted out of the open space tax ordinance. So, Arlington wants the land used as open space, but wants to tax it as if it is not. That’s just not fair.

Delegate Hugo was quoted in the Washington Post putting it very succinctly. “You and I see a fairway, Arlington sees a house on the tee, three or four on the fairway and another on the green,” Hugo said. “They’re really just gouging these folks.”

Clearly Army Navy is being called out for special treatment in order to tax it out of existence. This is not fair to our Veterans or active Military Soldiers, Sailors, Marines, Airmen, and Coast Guard. Thankfully, Virginia, as a “Dillon-Rule” Commonwealth, has the ability to intervene. We should all thank and support Delegate Hugo and others as they do so.

The bill passed the House and the Senate, by a wide bi-partisan majority. Some Democrats oppose it (e.g. Blue Virginia which calls it a “party-of-the-wealthy Republicans” bill) because, surprise, surprise, it will impact Arlington’s ability to raise money for government. I guess this is par for the course.

The Governor should sign it anyway, as it is a bipartisan fix to a clearly discriminatory policy that impacts American Veterans and Active Military.