As a young Republican Muslim, Christopher Newport University student Nadia Elgendy is on the front line of the GOP’s efforts to battle discrimination.

While reading Friday’s announcement from the College Republican Federation of Virginia (CRFV) condemning the hate groups so visible at Charlottesville’s “Unite the Right” march, Nadia, who is chairman of CRFV, immediately came to mind so Friday night I reached out to her.

A vibrant young woman from Northern Virginia’s Fairfax County, Nadia is very involved with Virginia Republicans as a member of NextGenGOP, former chairman of the Christopher Newport University College Republicans, and now as chairman of the state CRs with a seat on RPV’s governing State Central Committee.

I asked her thoughts about the resolution that her inclusive younger generation of the GOP felt moved enough to pen, pass, and publish.

“Many Republicans, myself included,” Nadia said, “have never experienced the presence of white supremacy in the party.”

“Unfortunately,” she continued, “the goal of ‘Unite the Right’ is to find belonging in the political mainstream, and ultimately, the Republican Party. This cannot be tolerated, and I’m confident that my colleagues in the RPV will join us in taking action against this.”

CRFV’s Executive Committee released the resolution that passed with an overwhelming majority of their membership, condemning the tragic events that unfolded during the Alt-Right/KKK/Neo-Nazi/White Supremacist rally.

As their chairman, Nadia added, “I am incredibly proud of the CRFV’s leadership for passing this resolution. This is the first step to ensuring that College Republicans remain an inclusive organization across the Commonwealth.”

Leadership from the younger generation was also seen when the College Republicans at the University of Virginia issued a proactive statement the day before the planned rally events. In it they didn’t mince words in their condemnation of the hate groups who were expected to show up, and vowed to show there was no room for that hatred at the University and the community.

Virginia’s 11th District Republican Congressional Committee passed a similar resolution earlier this week, something CRFV reference when they noted their support of statements from members of the Republican Party stating against the hate and violence. 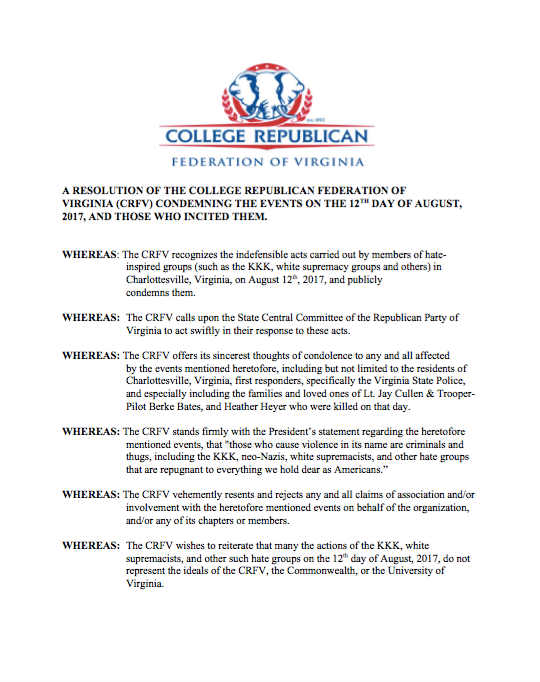 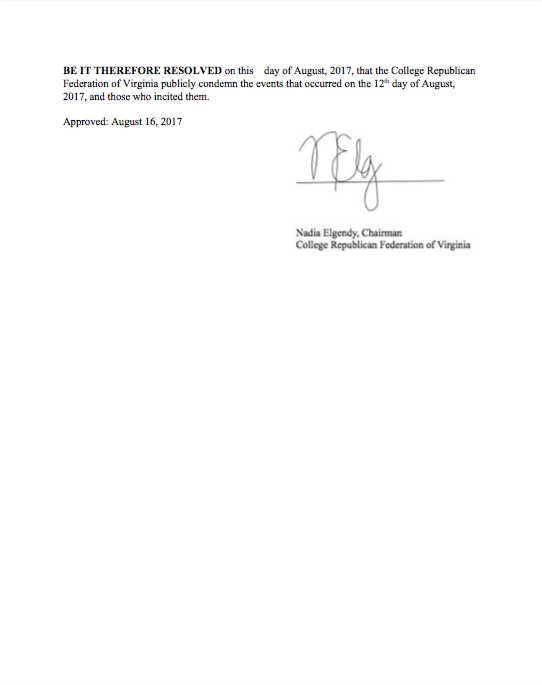