5:45: We’re 15 minutes away from the kick off of this event. Crowds have gathered in front of the stage and traffic is reportedly backed up five miles plus on I-64. Traveling press has arrived — the guys who go everywhere with the candidates. Susan Allen is here and Bill Bolling is supposed to be on the premises. It’s a beautiful sunny day in the Shenandoah Valley.

5:50: Music from stage has been playing since 4:00. Steady crowds are still flowing in. Slow internet and sunny conditions … will have more photos up as it’s possible. This event is expected to go on until 8:00 p.m. ending with fireworks.

6:15: Announcer has just come on stage to say they will begin shortly but there’s still a long line of cars waiting to enter the venue so they’re going to give a few more minutes. 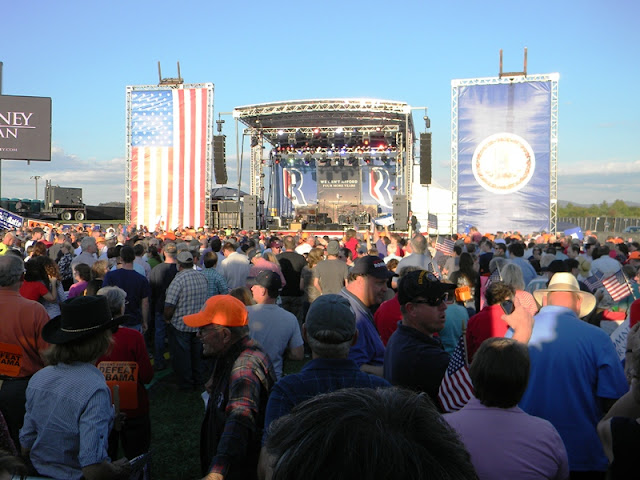 6:20: Shooting t-shirts into the crowd. Energing everyone … Governor Bob McDonnell is reportedly on the premises. That means we will have Bob McDonnell, Bill Bolling, Mitt Romney, Paul Ryan, AND Trace Adkins! Announcer is telling crowd to make some noise so the traffic lined up on the interstate can hear them. Rallying to crowd … excitement is in the air….

6:25: Have begun playing video from Mitt Romney on the giant screen. Roar from crowd…. People still streaming in.

6:26: Playing video from the Republican National Convention with the Olympians. Good then … good now.

6:30 Sun that has played havoc with laptop screens is finally sinking in the western sky. Crowd is growing. This crowd is ready for this event. Trying to estimate the crowd.

6:40: Delegate Ben Cline is on stage and is giving the invocation.

6:46: Susan Allen has just come on the stage. Yay, Mrs. Allen! She is such a motivating speaker and this crowd loves her! “Why is Virginia so important? Because this is where America began!” “And when George Allen is in the U.S. Senate” … HUGE ROAR FROM THE CROWD AGAIN! They love Governor Allen in the Shenandoah Valley….

6:50: Susan Allen is recognizing our military and veterans because “national defense is #1!”

6:54: “Let’s elected George Allen to the U.S. Senate!”is on stage. “HELLO, SHENANDOAH VALLEY!” He boomed to the crowd and now they are really fired up. This man has always been able to rally the crowds … he loves all of Virginia but the Shenandoah Valley is like the soft folk in the palm of God’s hand. The US. is the best .. Augusta County tonight is the greatest county in the greatest state in the greatest country in the world! “Only one man on that stage last night was qualified to be president of the United States! And that was Mitt Romney!” Roar from the crowd. “It’s time for Obama to go!” Roar from crowd. “This president’s economic policies have failed our country … it’s time for him to go!” Roar from crowd.

6:55: Fireball Bill Bolling — Lieutenant Governor of Virginia — is firing up the troops! “HELLO SHENANDOAH VALLEY!” Roar from the crowd. “Shout it so the people all around can hear — are you ready to win?” Biggest roar of the night — he fired up the crowd in that familiar Bill Bolling way with his booming voice and American values. Tonight, he said, Augusta County was the greatest county in the greatest state in the greatest country in the world! Crowd going crazy….

7:00: Stage is being set for Trace Adkins. Sun is setting behind the mountains … coolness is setting in.

7:05: Trace Adkins is on his second song … sound gooooood. I wanted him to win “The Apprentice.”

He quit playing at the “Na na na na” part and the crowd all around me was singing. There’s a GOP party going on tonight! Trace is now saying it’s an honor and privilege to be here tonight.. “we’ve been through some tough times and I’m afraid there will be more tough times ahead. There are still some men here in this country who are willing to do the right thing … and I’m here tonight on behalf of one of them.” Cheer.

7:25: “Tough people pull themselves up by the bootstraps…” he’s singing….

7:25: The line about “CNN” just made the CNN crew at the table in front of me throw their hands up in the air and cheer. LOL.

7:26: “Tough times don’t last … but tough people do.” Cheers from crowd as Trace continue to sing….

Just saw a friend who is with the Fire Department/EMT with another EMT bring in a stretcher. Uh-oh…

7:28: Trace Adkins is wrapping up the act. Saw a friend in the crowd who told me her son drove over from Longwood College and was refused admission. I suppose we’re at capacity … how many thousands are here?

7:41: Cheers … American flags waving, signs, Trace Adkins back on stage. He said he’s proud to say he’s been a lifetime member of the NRA. He’s honored to introduce the Chris Cox and Wayne LaPierre from NRA. “Virginia is Ground Zero for this election!”

Will post photos when able. Lots of good shots….

7:56: Paul Ryan coming on stage. Hitting all the right subjects.

8:01: Just introduced Mitt Romney as the next president of the United States. Huge cheers, applause, roar from the crowd … still going and going and going….

Romney and Ryan were both on stage together as Romney rallied the faithful. Even ended at 8:25 and Romney went into the crowd and is still there….

Romney spent about 10-15 minutes in the crowd mingling with supporters. Everyone came onto the stage afterward — Trace Adkins and all the speakers. Fireworks against the dark night sky silhouetted by the Blue Ridge Mountains completed the festive atmosphere. Great event. Photos coming….