Human remains found near Homestead Resort … could it be fugitive and suspected murderer Beacher Hackney? UPDATE: Remains identified as Hackney’s 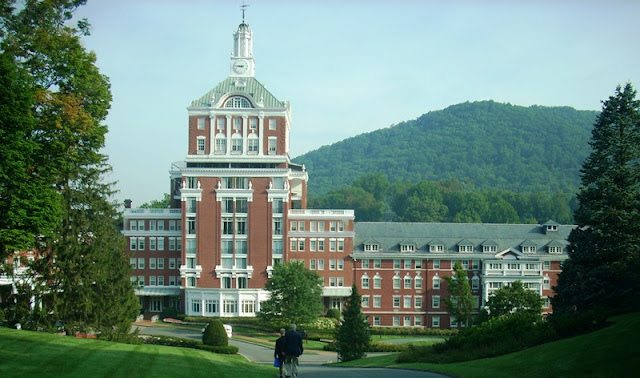 Human remains were discovered Sunday in woods near the Lower Cascades golf course at the Homestead Resort in Hot Springs, Virginia. Officials say the only missing person in the vicinity is fugitive Beacher Hackney, a former employee of the resort who is suspected of murdering two fellow employees.

As word leaks out of the grisly discovery, the story unfolds once again of what happened that fateful night.

Three-and-a-half years ago the quiet of the night was shattered in the mountains of western Virginia when two employees of the historic Homestead Resort were murdered and another employee, suspected of committing the crime, disappeared into the dark, never to be seen again.

It was a busy Saturday night on March 21, 2009, in the tiny town of Hot Springs that has been frequented by generations of visitors for its healing mineral springs and rural beauty. The stately formal dining room of the Homestead was bustling that evening as the band entertained and guests dined while, next door in the kitchen, staff hustled to prepare dinner requests.

It was around 8:00 when a 59-year-old loner named Beacher Hackney, a janitor at the resort who did not associate with co-workers and was described by some as a ticking time bomb, allegedly released his pent-up anger at supervisors Ronnie Stinnett, 60, and Dwight Kerr, 39. According to police, he reportedly shot and killed the two men in the kitchen, then calmly walked out the back door and disappeared into the night. He has not been seen since.

In the days that followed, a massive manhunt had local authorities as well as Virginia State Police, the U.S. Forest Service, the Virginia Department of Game and Inland Fisheries, and neighboring Highland County authorities searching the surrounding rugged Allegheny Mountains as well as roadways in and out of the rural county. Bringing in a helicopter, tracking dogs, and all-terrain vehicles, they closed public schools as a precaution in pursuit of the fugitive who was considered armed and dangerous.

Shortly after the crime, an arrest warrant was issued for Hackney for capital murder. His spartan apartment, and the vehicle he left at the resort’s parking lot, were searched but held no clues to help authorities. Bath County Sheriff Larry Norfleet said on the first year anniversary of the murder in 2010 that he thought Hackney was still alive. The crime has been featured several times on America’s Most Wanted television show, most recently updated in December 2011.

A native of West Virginia and described by his step-daughter Loretta Robbins as a survivalist, some speculated that Hackney may be living somewhere in the mountains. Others suggested he could have committed suicide in a remote location. With Bath County’s proximity to Interstate 64 and the West Virginia state line, there is even the possibility he escaped beyond the immediate vicinity.

Memories of the tragedy linger. Employees at the Homestead, Bath County’s largest employer, are like family as generations spend their lives working its historic corridors and expansive grounds, so losing two of their own was difficult for this close-knit group.

Since the murders, life has slowly returned to normal in Hot Springs and the surrounding area but people still looked over their shoulders and asked, “Where is Beacher Hackney?”

Email a friend: Human remains found near Homestead Resort … could it be fugitive and suspected murderer Beacher Hackney? UPDATE: Remains identified as Hackney’s