Hundreds turn out for Prasnicki military funeral in Lexington, VA

“What’s better than fighting for your country? There’s no more honorable
thing can you do.”
U.S. Army 1st Lt. Stephen “Chase” Prasnicki
(2006 in Roanoke Times) 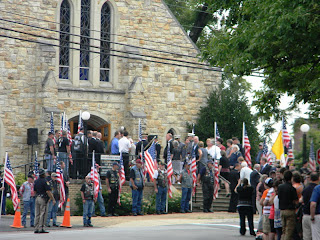 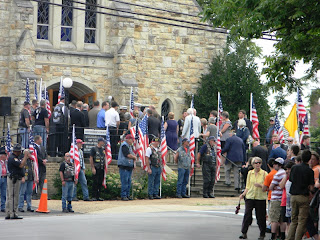 Lt. Prasnicki was killed during combat operations in Afghanistan on June 27, five days after arriving in that country. This West Point Military Academy graduate was a Platoon Leader for the 4th Battalion, 319th Airborne Field Artillery Regiment, 173rd Airborne Brigade Combat Team, Bamberg, Germany, and had been deployed to Afghanistan on June 22, 2012.

The streets were closed off by police as patriotic Americans lined the roadways including active military, faculty from the nearby universities, military veterans, and many young people and classmates who knew Prasnicki when he was a star quarterback for Rockbridge High School’s football team. 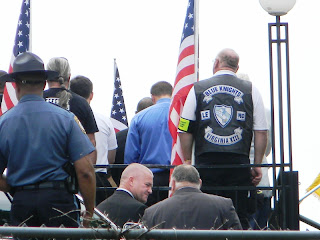 Word began circulating Monday that the Kansas-based Westboro Baptist Church protesters had put out a notice that they would be in Lexington which propelled many to take to social media and start spreading the word, asking family and friends to join them to support and protect a grieving military family. 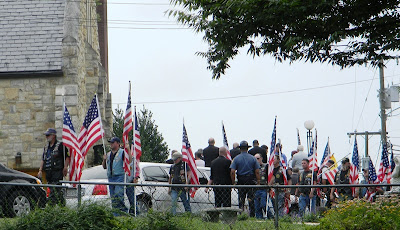 Thankfully, Westboro did not show up, perhaps scared off by the overwhelming crowd. The possibility of their presence had caused many to be there just in case the hate-filled group turned out with their anti-American, anti-military signs. 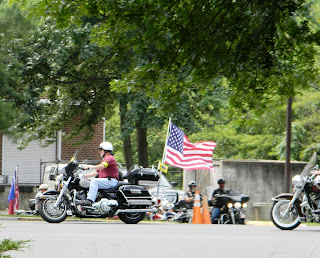 Patriot Guard Riders escorted the remains to the cemetery.

Hundreds of mourners lined the streets of historic downtown Lexington Tuesday morning to honor the memory of fallen U.S. Army hero 1st Lt. Stephen “Chase” Prasnicki, 24, an Army Ranger who was killed by an IED during combat operations in Afghanistan on June 27, five days after arriving in that country.

On an overcast, muggy summer day in this small Shenandoah Valley city dominated by Virginia Military Institute and Washington & Lee University, Patriot Guard Riders held American flags while many from the community and beyond stood in quiet reverence. Police had blocked streets around the funeral area so the overflow crowd could stand as close as possible to the front of St. Patrick’s Catholic Church to hear the service piped to outside speakers that was taking place inside for this local high school football star and West Point Military Academy graduate.

When word began circulating Monday that Kansas-based Westboro Baptist Church may show up to disrupt the funeral with their hate-filled signs and “preaching,” many were spurred into action. I first heard from my neighbor whose daughter’s husband is a Marine, then word came from homeschool alumni, one whose husband was good friends and a classmate with Chase. They sent out the rallying cry and others joined in to spread the word like an ever-widening ripple on a pond.

In Lexington on Tuesday, side streets were lined with cars as many parked blocks away. Some mourners wore business attire while others were in shorts and casual summer clothes but all were determined to get there. Some had altered plans so they could stand up for the family against a possible Westboro appearance.

The 90-minute mass ended as two dozen Patriot Guard Riders — American flags streaming behind them as the mountains echoed with their rolling thunder — escorted the remains for burial at Green Hill Cemetery in Buena Vista. A celebration of Chase’s life was held afterward at Marshall Hall at Virginia Military Institute.

As nearby American flags few at half-staff as directed by Governor Bob McDonnell, himself a U.S. Army veteran, a grateful nation bowed its head in gratitude for the sacrifice of this young soldier and his family in yet another reminder that freedom is not free.

First Lieutenant Stephen Chase Prasnicki, United States Army, was killed during combat operations in Afghanistan on June 27, 2012. Chase was born on Feb. 9, 1988, in Lexington, Va., and grew up in Rockbridge County,
Va.

At the time of his death Chase was a platoon leader assigned to the 4th Battalion, 319th Airborne Field Artillery Regiment, 173rd Airborne Brigade Combat Team, Bamberg, Germany, and had deployed to Afghanistan on June 22, 2012. He graduated from Rockbridge County High School in 2006 and was the starting quarterback for three years. Chase
graduated from the United States Military Academy at West Point, N.Y., in 2010.

He was recruited as a quarterback for the Black Knights of the Hudson and played as backup quarterback for three years prior to switching to defensive safety for his senior year with significant playing time. After graduation from West Point, Chase was a graduate assistant during the 2010-11 academic year, at the United States Military Academy Preparatory School in New Jersey, coaching football. He graduated with honors from the Field Artillery Basic Officer Leaders Course, Fort Sill, Oklahoma in 2011.

Prior to attending United States Army Ranger and Airborne Schools at Fort Benning, Georgia, Chase was assigned briefly as an Army recruiter in Rockbridge County. He graduated from Ranger School in September 2011 and Airborne School in October 2011. Chase married Emily Nichols of Yorktown, Va., on Nov. 26, 2011, at Langley Air Force Base, Virginia, and departed the following day for his first duty assignment with the 173rd Airborne Brigade Combat Team in
Germany. Upon completion of student teaching in December 2011, Emily followed Chase to Germany, and they made their home in Bamberg, Germany.

In February 2012, Chase graduated from Pathfinder School while in Bamberg, Germany.

Chase is preceded in death by his maternal grandparents, Joe and Helen Cash, and his paternal grandfather, Stephen Prasnicki.

He is survived by his wife, Emily; his father, David Prasnicki; his mother, Debbie and her husband, Phillip Arthur; his sister, Lauren; his brother, Tyler; his paternal grandmother, Janice and her husband, Harry Wilson; his in-laws, Stuart and Meg Nichols; and many aunts, uncles and cousins.

Funeral services will be held at Saint Patrick’s Catholic Church in Lexington, Va., at 11 a.m. Tuesday, July 10, 2012. Chase will be laid to rest at Green Hill Cemetery in Buena Vista, Va. Immediately following, there will be a celebration of Chase’s life at Marshall Hall, Virginia Military Institute. Friends and family are welcome.

In lieu of flowers, donations can be sent to USO Families of the Fallen, 116 Purple Heart Drive, Dover AFB, DE 19902.

Email a friend: Hundreds turn out for Prasnicki military funeral in Lexington, VA