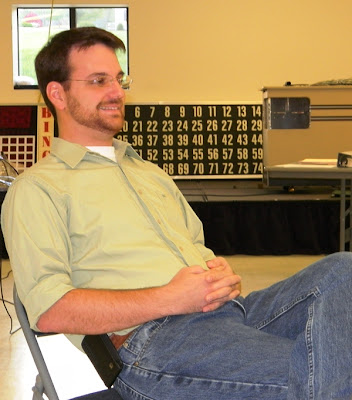 Speaking at the Verona Fire Department, Karaffa went into detail about his reasons for voting with four other supervisors — David Beyeler, Larry Wills, Jeff Moore, and Michael Shull — to hold a public hearing on April 18 to consider raising the tax rate.

With serious budget shortfalls and unfunded mandates from the General Assembly, Augusta County has found itself in the same difficult position as other localities around the Commonwealth as they try to provide revenue for school needs as well as core services such as additional deputies and firefighters. With bills coming due after years of low taxes, fiscally conservative leaders such as Karaffa and supervisor Chairman Shaun Kenney in nearby Fluvanna County have found themselves in the unusual and uncomfortable position of having to consider higher taxes.

While Augusta is looking at raising taxes on real estate and vehicles, Fluvanna is holding a public hearing to consider a 20 percent tax hike, showing that being fiscally conservative doesn’t mean being blind to fiscal concerns. Charlottesville’s Waldo Jaquith explained it this way:

Fluvanna’s got an interesting tax situation, Bryan McKenzie wrote in yesterday’s Daily Progress. The county’s Board of Supervisors has long been dominated by conservatives, and has steadily lowered taxes relative to expenses as election after election has put in office people who promise to lower taxes. As a result, the county has put off some financial problems for years now, leaving them in a terrible financial situation, without enough money to pay their basic expenses.

Perhaps the most vocal supporter of this tax increase is the chairman of the Board of Supervisors, Shaun Kenney, who is as conservative a Republican as you’re liable to find. (Disclaimer: He’s an old friend of mine.) Kenney is advocating what he regards as the real fiscally conservative solution: getting the county’s financial house in order, rather than going into further debt and leaving the problem for some future Board of Supervisors to deal with.

The Staunton News Leader has written in the past that a tax increase was necessary in Augusta County, and its latest editorial agreed with the five supervisors:

No one wants to see their taxes go up. But at the same time we want to have ample law enforcement, quick, efficient fire service and the best schools in the land. This is a situation where you cannot have your cake and eat it too and for Augusta County residents, it seems the time has come to pay a bit more in taxes in order to maintain a sufficient level of services.

At 48 cents per $100 of assessed value, Augusta County is next-to-lowest in real estate tax rates in Virginia followed only by Highland County.

After 90 minutes of answering questions Tuesday night, Karaffa said he is still weighing a potential 3-cent increase in real estate taxes, and a 32-cent increase in personal property taxes on cars and trucks.

“I need to think about what is in the best interest of the people I represent,” he said. Karaffa said he would like to see added cuts in the 2012-13 budget.

The suggested alternative to a tax increase concerns Karaffa.

He has doubts about dipping into capital accounts the county has for major building projects, depreciation and infrastructure needs to fund another $2.4 million for county schools and about $1 million for added firefighters, Sheriff’s deputies and other spending identified at recent budget work sessions.

Perhaps members of the community are coming to realize a tax increase is inevitable if they want to enjoy high quality schools, public safety, and emergency services.  Reporter Calvin Trice at the Staunton News Leader noted:

Judging by the turnout, hardly anyone needed convincing — at least not enough to come out to the community meeting Karaffa held inside the Verona Fire Department.

Karaffa and Kenney feel the time has come for action instead of kicking the can down the road for future boards. 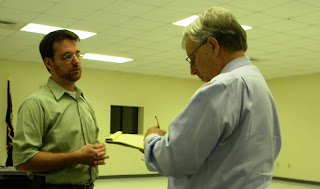