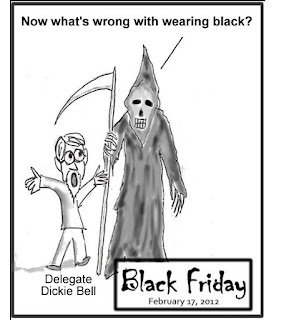 Today is “Black Friday” in Virginia, according to the VEA.

The Virginia Education Association (VEA) declared Black Friday as a “statewide day of mourning to lament the lack of commitment to public education, and the loss of respect accorded teachers by elected officials,” according to a flyer that was circulated by the VEA. Teachers who wanted to participate in the silent protest were encouraged to wear black.

News of teachers using this manner to express their First Amendment rights didn’t sit well with one local legislator who took teachers to task by way of Facebook. According to the News Virginian:

Del. Dickie Bell, R-Staunton, reacted to the news of Black Friday with a posting on his Facebook page Wednesday.

Bell’s posting said: “So the VEA thinks grade school antics like this will gain teachers the respect they deserve … really? How much instructional time will be lost explaining to students why you played ‘dress-up.’ Behavior like this does not enhance your professionalism or bring you the kind of positive attention you seek from the general public. This speaks loudly of VEA leadership.”

Reached by phone later in the day in Richmond, Bell said he believes the day of mourning is mainly in response to his legislation regarding teacher and principal tenure that passed the House earlier this week.

Under the legislation, tenure would be phased out for teachers not eligible for continuing contracts by 2013-14. They would receive a three-year term contract that would not automatically renew. Probationary periods for new hires would stretch to five from three years, and all teachers and principals would have annual evaluations.

Among those who disagreed with Bell’s Facebook comment was one who noted, “… with moral as low as it is in certain schools anything that allows them to express themselves deserves applause. I for one think this is an acceptable way to let people know that the lack of funding for education is taking its tole. [sic]  Not to mention today is the day that many will receive their ‘pink slip.’ ”

Indeed, a teacher friend who had not originally planned to participate in Black Friday changed her mind after reading Bell’s comments in the News Virginian.

Teachers may be confused at the sharp words directed at them by Bell, himself a teacher in the Augusta County public school system when elected to the legislature in 2009. At the time, saying he could be a legislator and an advocate for teachers, he was granted time off by the Augusta County School Board to attend the General Assembly session. Later, however, when he asked for additional days as needed to be in Richmond, the school board said they needed a full-time teacher in the classroom and turned down his request. He subsequently retired.

Some responses to Bell’s Facebook comment have been from teachers wondering what happened including one who simply wrote, “How can you treat your former colleagues this way?”

Meanwhile, local school boards and governing bodies continue to try to work with shrinking budgets and growing deficits. A letter was recently hand-delivered from the Augusta County Board of Supervisors and the Augusta County School Board to local state legislators, including Bell, asking for help from the state with the Virginia Retirement System costs to the county.

In December, the Augusta County School Board voted to close Ladd Elementary School, and recently indicated that Craigsville Elementary and the Shenandoah Valley Governor’s School (SVGS) may also be on the chopping block.

That caused a group of teachers and parents, frustrated at the stalemate between supervisors and the school board, to form Support Our Schools (SOS). Currently they are circulating an online petition that has already collected almost 1,000 names of those asking to increase support and revenues for public education. SOS has also encouraged residents to attend the February 22 Augusta Board of Supervisors meeting to show support and speak to the issue.

In the past few days, Save Shenandoah Valley Governor’s School was formed on Facebook and quickly gained almost 200 followers.

The VEA’s concerns go beyond legislation, as they noted in their request for participants on Black Friday:

• The continued assault against teachers. The most recent attack targets your continuing contract rights. Bills under consideration single out teachers and
principals as the only public employee groups denied a fair dismissal process.

• Attacks on retirement. The Virginia Senate and House of Delegates have both passed bills which drastically cut retirement benefits.

• Funding cuts. State SOQ funding has been permanently cut $1.4 billion per biennium. Chronic underfunding by the state has left localities to slash programs and cut jobs.

• Harmful increases in class size. Virginia used to be 3rd in the nation in small class sizes. Due to underfunding, we’re now 41st. Students are losing out!

Word from public school systems throughout the Commonwealth on Friday was that a number of teachers were cloaked in black, and some wondered if this silent demonstration would lead to political action as future elections loom on the horizon.