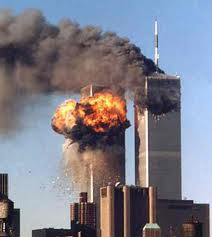 “Freedom itself was attacked this morning by a faceless coward, and freedom will be defended.”
– President George W. Bush (9/11/01)
He was a war-time president so it seems only right that a huge chunk of twisted steel from the terrorism attacks on September 11, 2001, will become a permanent part of former President George W. Bush’s library located in Texas. The almost-two ton, 17-foot piece of history will be one of the 43,000 artifacts that will be on display once the library opens:

The 16.7-foot, 1.85-ton piece of mangled steel isn’t just any relic from America’s hallowed ground — experts say it’s “impact steel,” struck directly by one of the hijacked jets that slammed into the Twin Towers on 9/11.

The attacks, that killed 3,000 innocent people, molded a presidency and a nation.

[The 9/11 steel] will share top billing with another 9/11 icon — the famous bullhorn Bush used when speaking to rescue workers from Ground Zero three days after the attacks. Several other mementos will also be on display, including Bush’s handwritten notes from his first public statement on the tragedy.

The library and institute are the repository for 70 million pieces of paper and 80 terabytes of electronic data, including 200 million emails. A full-scale reproduction of the Bush Oval Office will be featured, and Laura Bush has created a Texas rose garden and a North Texas native prairie.

But they all pale by comparison to an ugly piece of steel salvaged from the moment that changed a nation, a President, and all of us forever.