Paging Tim Kaine: Obama is in the house 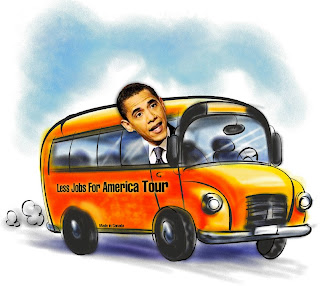 Where, oh where, is a President to go to sell his latest jobs bill that was voted down in Congress? Thinking a bus tour of swing states North Carolina and Virginia would do the trick, the word went out that the President was coming to town.

Tim Kaine has long been a White House darling who supported Barack Obama when he decided to run for president, and later went on to become head of the Democratic National Committee. As a former governor of Virginia and running for U.S. Senate, it wouldn’t be too much of a stretch to expect Kaine to welcome Obama to his home state with open arms during the President’s bus tour of the area.

However, that doesn’t appear to be the case. Kaine is in a neck-in-neck race against popular former Governor George Allen and, apparently, doesn’t want to get tainted by Obama’s sinking popularity. In fact, a number of other Democratic candidates would also be happy for Obama and his dismal approval ratings to stay away.

The Washington Post reported that some Virginia Democrats went a step further and called the White House to ask that Obama take his bus tour elsewhere:

“Three years ago, Democrats in Virginia couldn’t get enough of Barack Obama – a popular, transformational figure running for his first term as president.

“But as Obama arrives in Virginia Tuesday for a two-day swing to promote parts of his jobs plan, some Democrats are distancing themselves from him – even in supposedly blue Northern Virginia…”

Even Boston.com has picked up on the distancing of Democratic candidates from Obama, running the article by AP Political writer Bob Lewis (“Some dems won’t join Obama in swing through state”):

For that matter, don’t expect Tim Kaine, the former Democratic National Committee chairman and Virginia’s governor two years ago, to join his old ally either.

It’s gotten to be a pastime for news reporters who have noticed the distance between the president and Democratic candidates with Virginia newspapers chiming in, too. Fredericksburg.com was particularly blunt:

Democrats locked into tight races are running for the hills as the president tours. Originally the plan was for Mr. Obama to visit Danville, Newport News, Charlottesville, and Fredericksburg. But that schedule was nixed when nervous Virginia Democrats facing re-election harrumphed about it. Even former governor and Democratic Party chairman Tim Kaine, now locked into a neck-and-neck Senate battle with former governor and senator George Allen, just happened to have plans to be in Northern Virginia while Mr. Obama is elsewhere in the state.
…
Mr. Obama’s support has slipped badly in Virginia, especially among independents, voters who tend to be the least ideological and the most pragmatic. They’re looking for what works, and so far the president’s performance looks weak to them. A recent Quinnipiac poll showed that Virginia independents disapprove of the president’s performance by 62 percent to 20 percent, higher even than the national rate for independents, in which 56 percent disapprove and 38 percent approve.

None of this was lost on the Republican Party of Virginia, eager to turn Virginia from its 2008 shade of purple back to a solid Republican red:

According to today’s Washington Post, Virginia’s desperate Democrats called the White House and asked the President to take his bus tour someplace else.  But then the question became, where?  With Republicans running candidates in 36 of 40 Senate districts the White House and Virginia’s desperate Democrats really struggled to find places where having the President campaign wouldn’t endanger their candidates’ chances.

It is very apparent this morning, even to Virginia’s desperate Democrats, that Virginia doesn’t want another four years of Barack Obama and his failed policies.  When you have the Democratic leader in the House of Delegates, Ward Armstrong, distancing himself from the leader of his party and Democrats up and down the ballot scrambling to get away from this bus tour, it is clear that the policies the Democrats have embraced for the past few years are being rejected by the people of Virginia.

Meanwhile, Obama continues his tour minus those who were eager to embrace him four years ago. With 9.1 percent unemployment, failed stimulus bills, questionable bailouts, and a gigantic mandated health care bill that is threatening to bankrupt the country, he has found himself distanced and separated from many in his own party. And the Obama bus tour rolls on….

Email a friend: Paging Tim Kaine: Obama is in the house